"HEY, KIDS! COMICS!" was - at least, up through the Bronze Age of Comics - the summons of the spinner racks found at many News Stands, Bus Depots, Grocery Stores, Convenience Stores and Liquor Stores throughout the country.  Liquor Stores were also called "Party Stores" in the mid-west - not exactly what you'd consider a thoroughfare for family entertainment, but, hey - if there were comics to be found, you'd find the fans there! 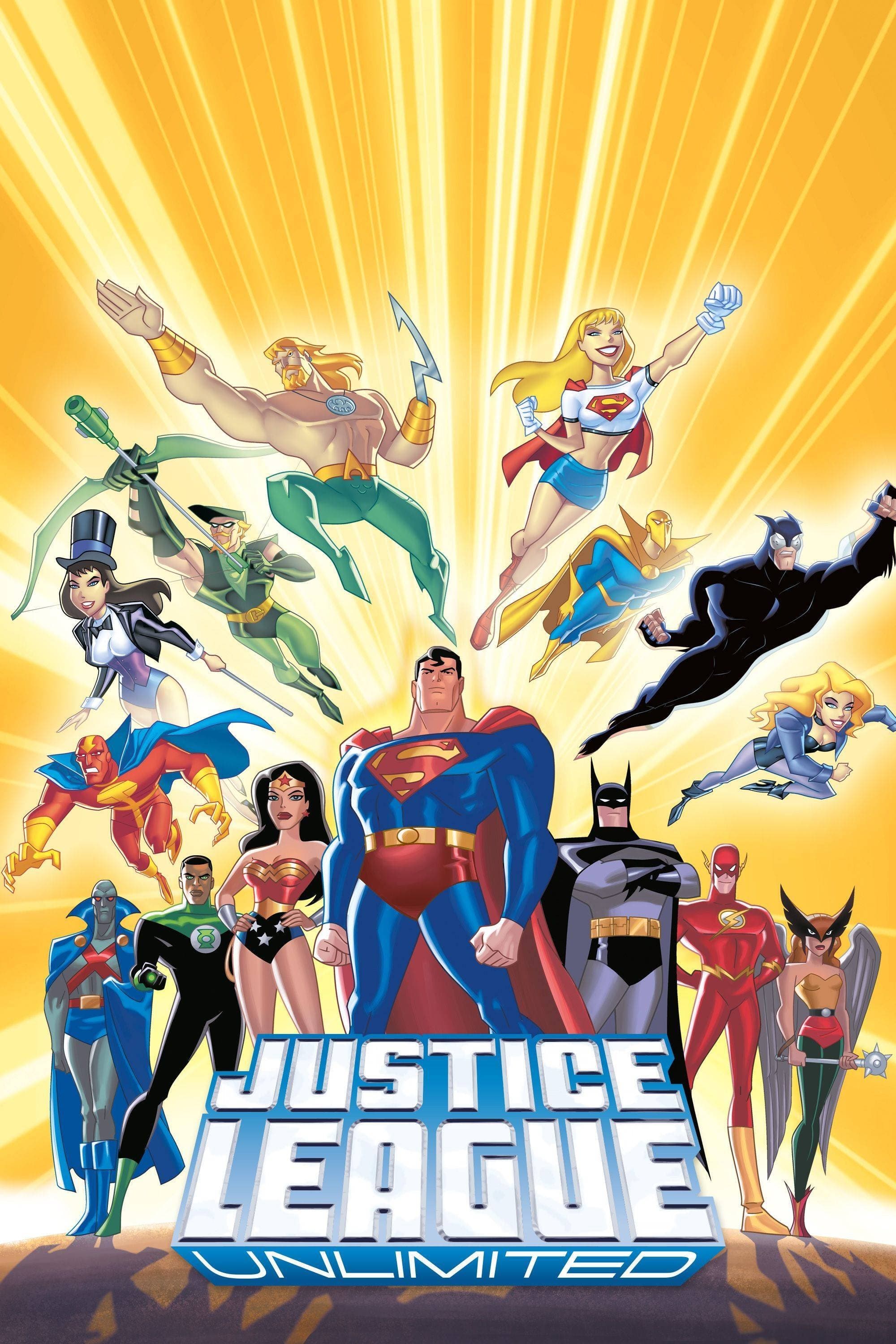 DC ANIMATED UNIVERSE (DCAU) VIEWER'S GUIDE (NEW 12/2022) The DC Universe, writ large for the small screen. Brought to you by Bruce Timm, Paul Dini and a host of other animators, the DC Universe has never had a more well-realized, singular vision of how a cinematic version should work on any screen. Brilliant and well worth your time.

SPINNER RACK REMEMBRANCES (NEW 06/2022) Rarely seen these days, we've restored some old comic rack signage for your enjoyment. And maybe - someday - we'll find the comic book spinner rack we'd like to have in our collection. 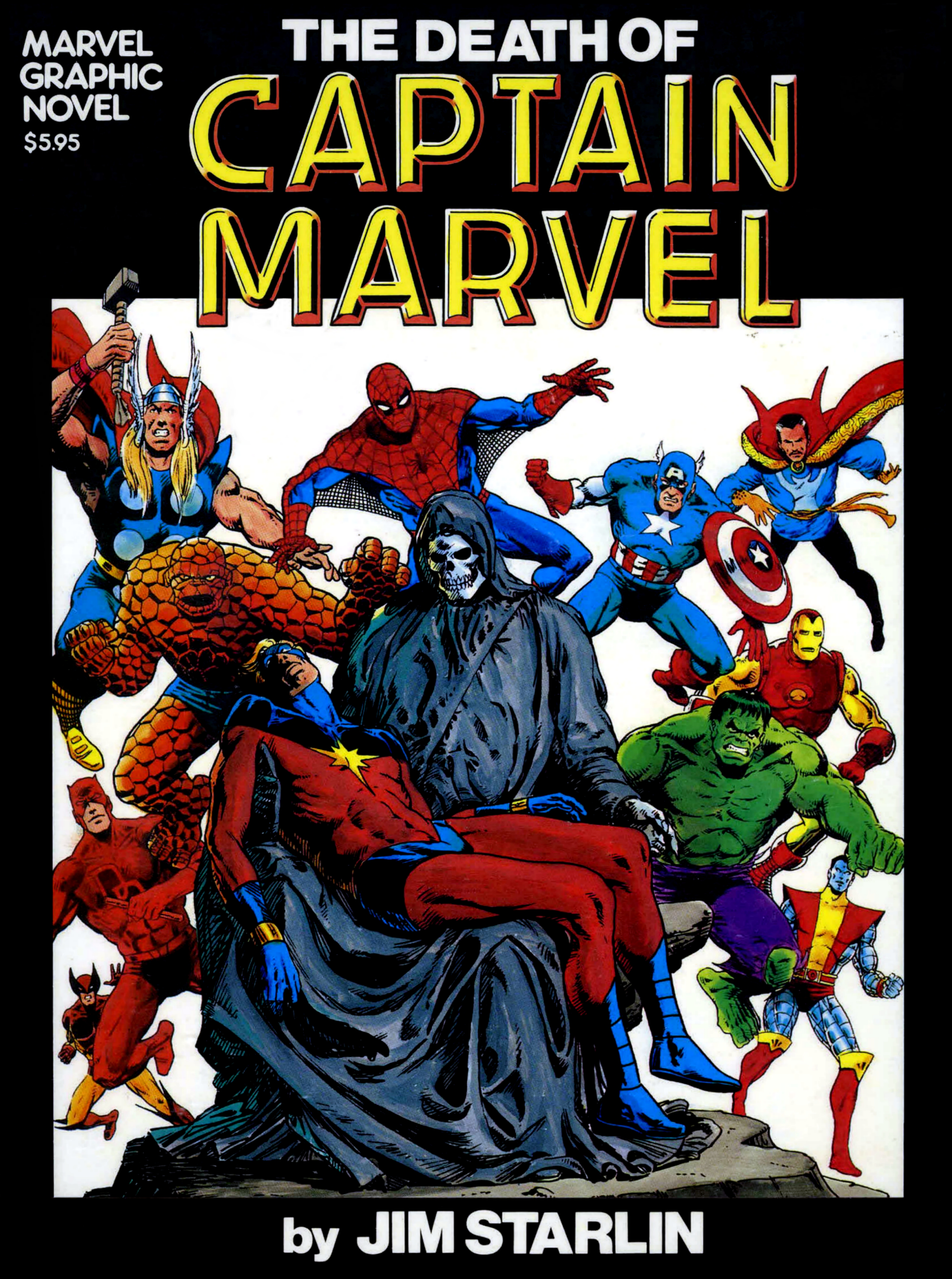 COMIC BOOK PIETA COVERS (UPDATED 01/2021) A comic book trope that is not discussed very often these days, covers inspired (at least, in part) by the Pieta. A short look at a bunch of covers ranging from 1946 to the almost-present with this feature. 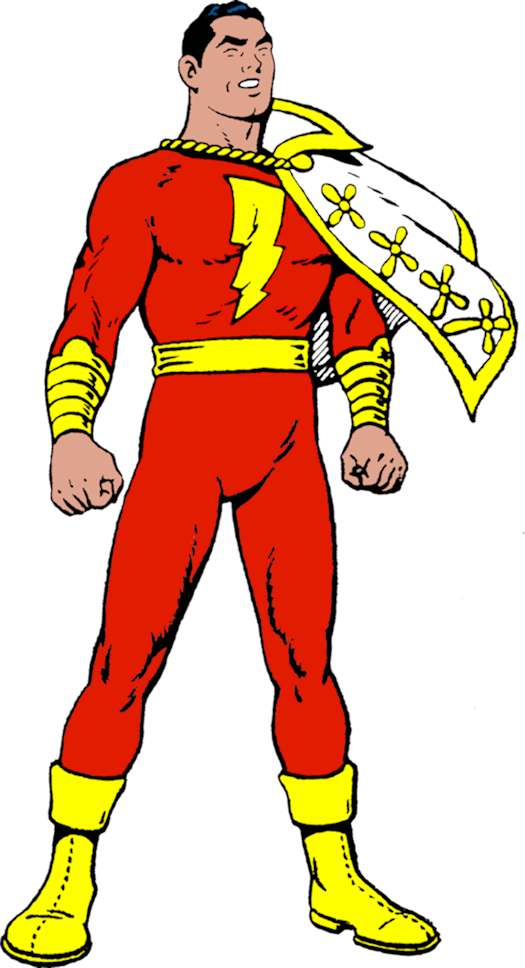 WITH ONE MAGIC WORD... SHAZAM! THE RESURRECTION OF THE *ORIGINAL* CAPTAIN MARVEL (UPDATED 06/2022) Rather unexpectedly, DC pulled this rabbit out of their hats at the end of 1972, changing forever the fabric of the DC Universe. This is a short page dedicated to the wonder that came with having this then-obscure character return to publishing by the very company that contributed to his demise 20 years earlier. 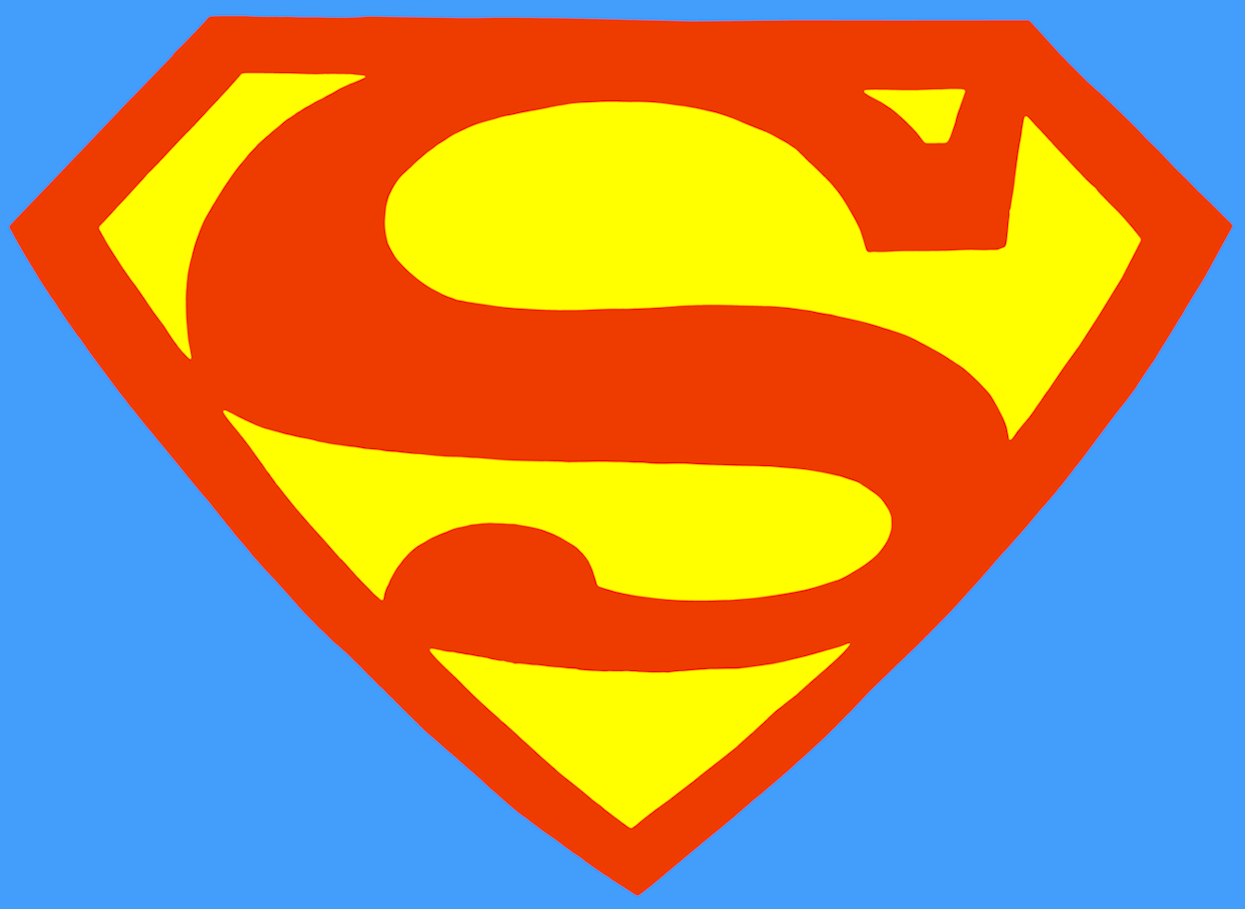 SUPERMAN'S SYMBOL/SHIELD/LOGO HISTORY (UPDATED GRAPHICS 09/2022)
This page was created to celebrate the origins of the World's Greatest Super-Hero - and the first - Superman! Created 22 years ago and updated as better graphics have been able to be created, we've preserved this mostly in original form from the AOL days and the interim metropolisplus.net days, as well. His iconic "S" has been reinterpreted over the ages, but no period was more labile than the first 7 years of his existence - check it out! 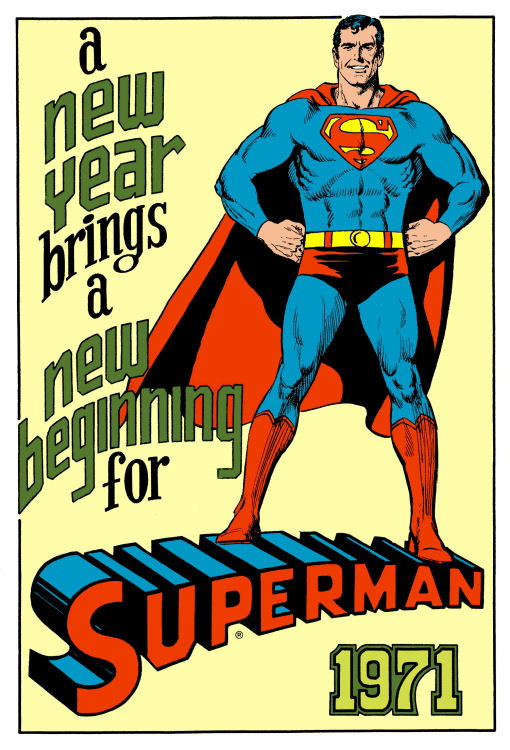 WHEN DOES "THE BRONZE AGE" BEGIN?
(UPDATED & NEW GRAPHICS 04/2021) The Bronze Age has languished in obscurity for most of comics fandom. We work with historical facts and figures to bring a more definitive answer. This is an article intended to invite discussion and, perhaps, some debate. But the position has its merits based in previous comic book history. 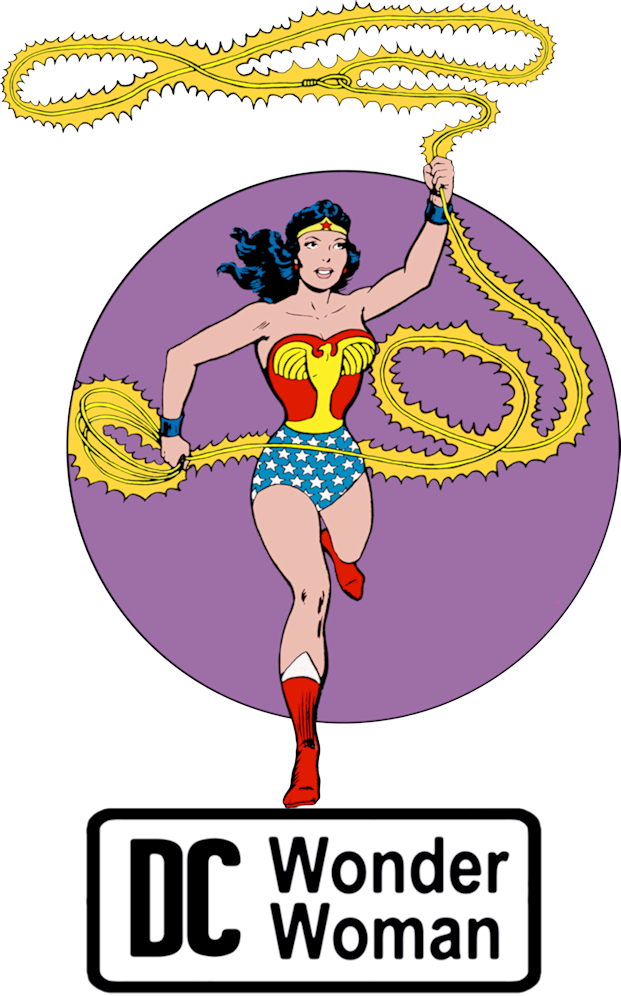 DC's BRONZE AGE "CHARACTER BULLET" LOGOS (UPDATED GRAPHICS 12/2022)
Right at the start of the Bronze Age, DC got rid of the original "DC Bullet" and replaced it with icons of the heroes starring in the title. It was the first of many changes that the logo would go through. 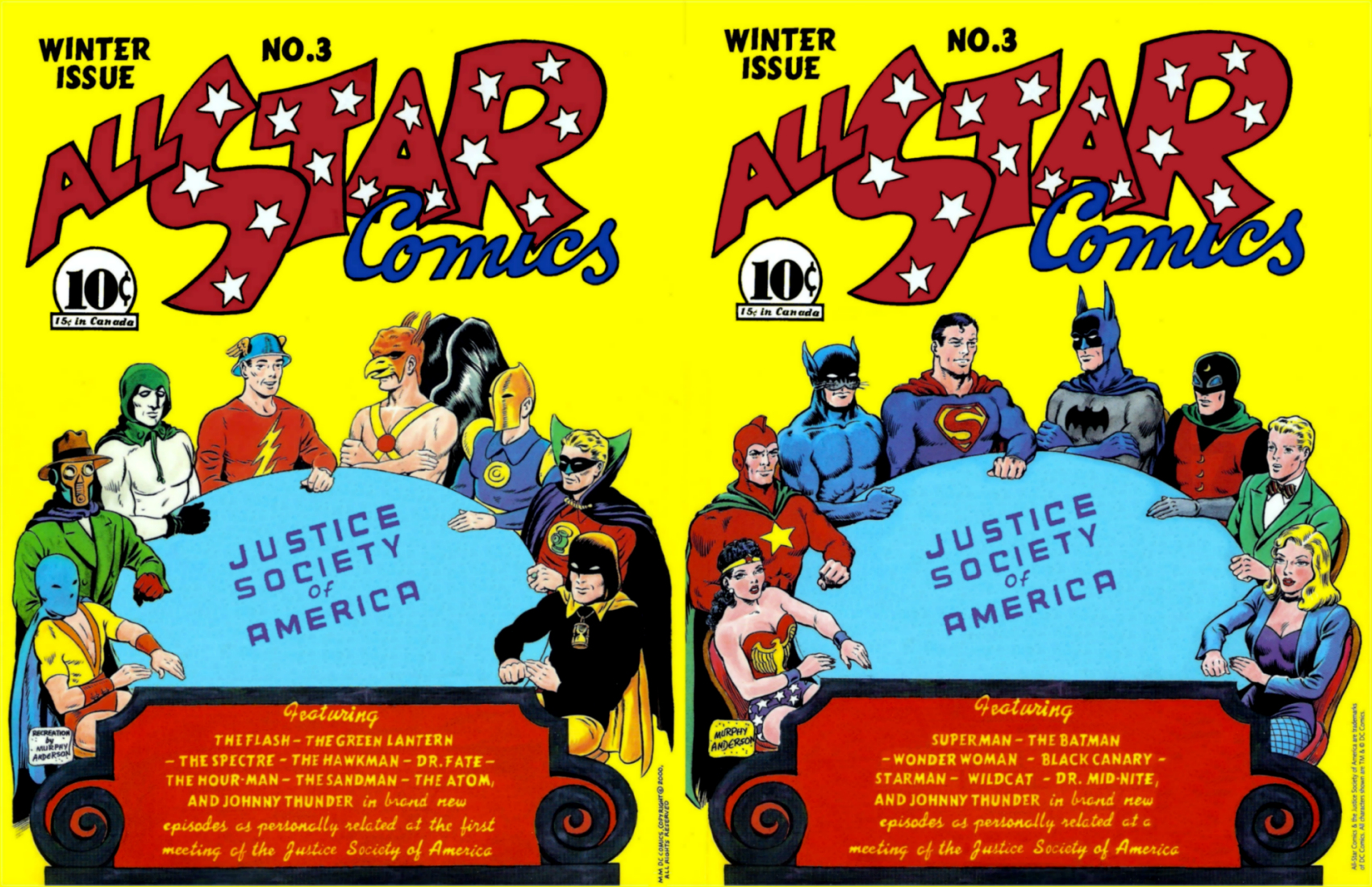 METROPOLISPLUS.COM'S IMAGE RESTORATION PROCESS FEATURING THE JSA! (UPDATED GRAPHICS 09/2022) Every image brought to you from MetropolisPlus is intended to be the best possible. Endless hours are spent poring over images with image editors in order to bring clarity to comics and comics history. The centerpiece of this page is primarily Murphy Anderson's rendering of the Justice Society of America (JSA) from a pinup he provided for an issue of "Justice League of America" #76. Initially, I had reconstructed the image from several sources to bring a solid idea of what the artist intended. However, I was eventually fortunate enough to have the owner of this piece, who had won the original art in an auction to benefit Murphy Anderson, allow me access to a high-resolution scan of the original art. So I've included a re-colored version of this lovely piece, as well as a quick explanation of how I restored the image of Superman adorning the masthead of this page. Enjoy!

RESTORING DAVE COCKRUM'S LEGION (UPDATED GRAPHICS 01/2021) A favorite of the Bronze Age, the Legion of Super-Heroes by Dave Cockrum retains a great volume of appreciative fans. Here, we restore some images in four-color beauty. The centerpiece of this page is the wedding of Bouncing Boy (Chuck Taine) and Duo Damsel (Llourno Durgo) from Superboy and the Legion of Super Heroes #200. Restoring this image from several sources provides the complete image as intended by the artist who brought the Legion to have their name on the masthead of Superboy's title and, eventually, take it over! All hail Mr. Cockrum!!

THE AMAZING OUTFITS OF SUPERGIRL! . 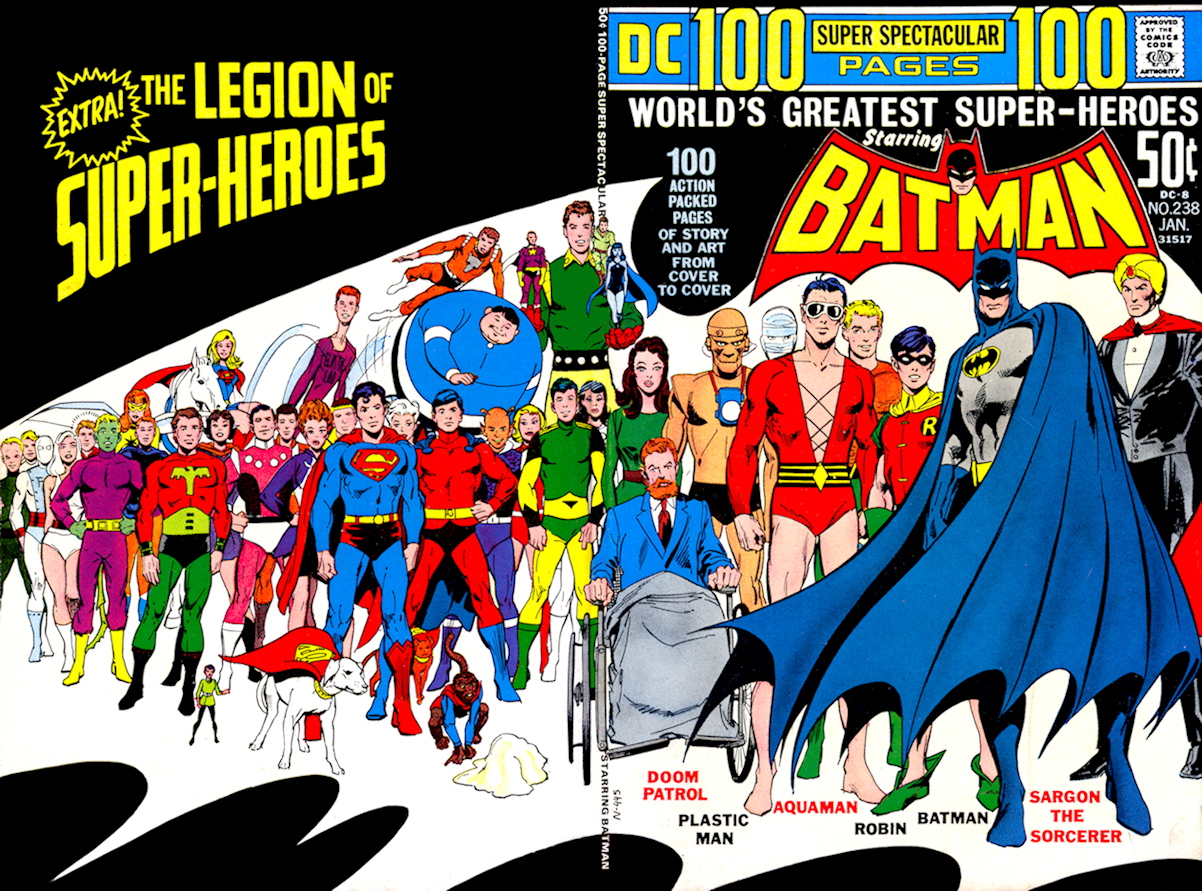 DC 100-PAGE SUPER SPECTACULARS (UPDATED GRAPHICS 11/2022) In this page, we have reconstructed all of the great wraparound covers and their "Key to the Characters" pages, as well as providing some history to my absolute favorite set of comics from the early 1970s. One 100 pages for 50¢ - cover to cover - such a deal!!!! 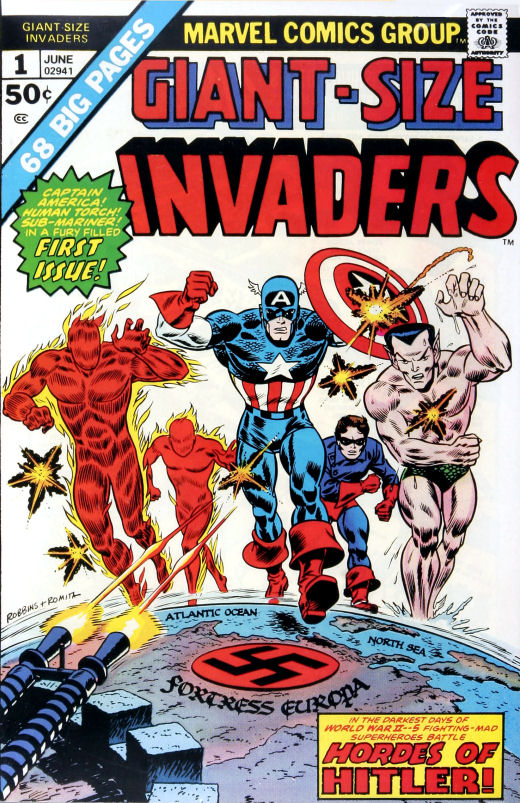 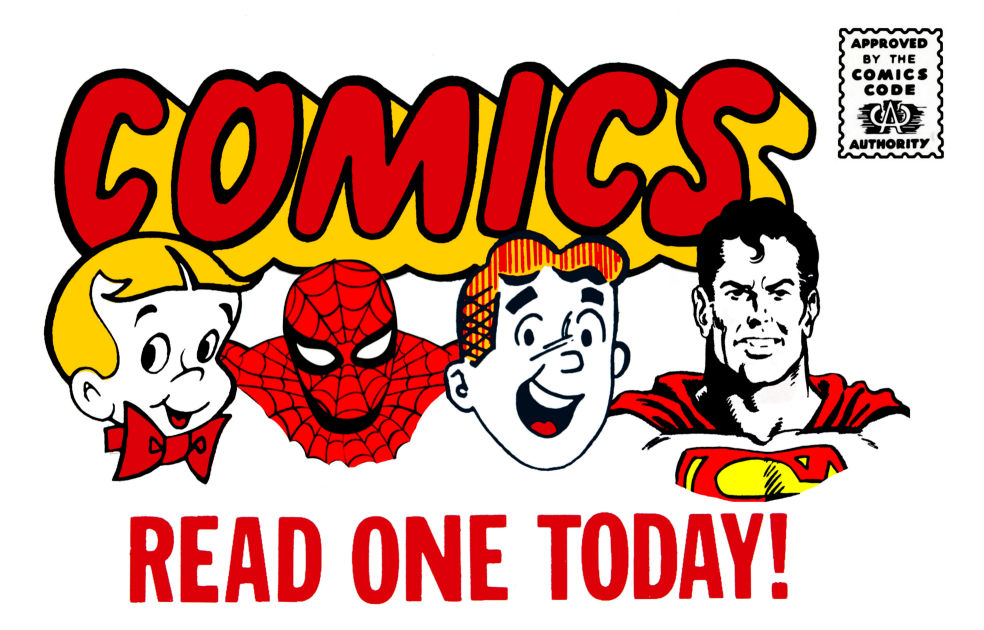 BRIAN G. PHILBIN'S GUIDE TO THE BASICS OF COMICS, COMICS HISTORY, COMIC COLLECTING AND COMICS VALUES This is a guide to comics & collecting that was originally intended for users from "AllExperts.com", but has taken on its own life as a website for beginners in comics collecting. I've connected with other resources to bring you the best possible basic information for enjoying, collecting, grading and - possibly - selling your comics. As indicated in the title, this is a guide, but not necessarily the definitive word on the subject. just a beginning to assist in starting you on your journey, should you so choose. 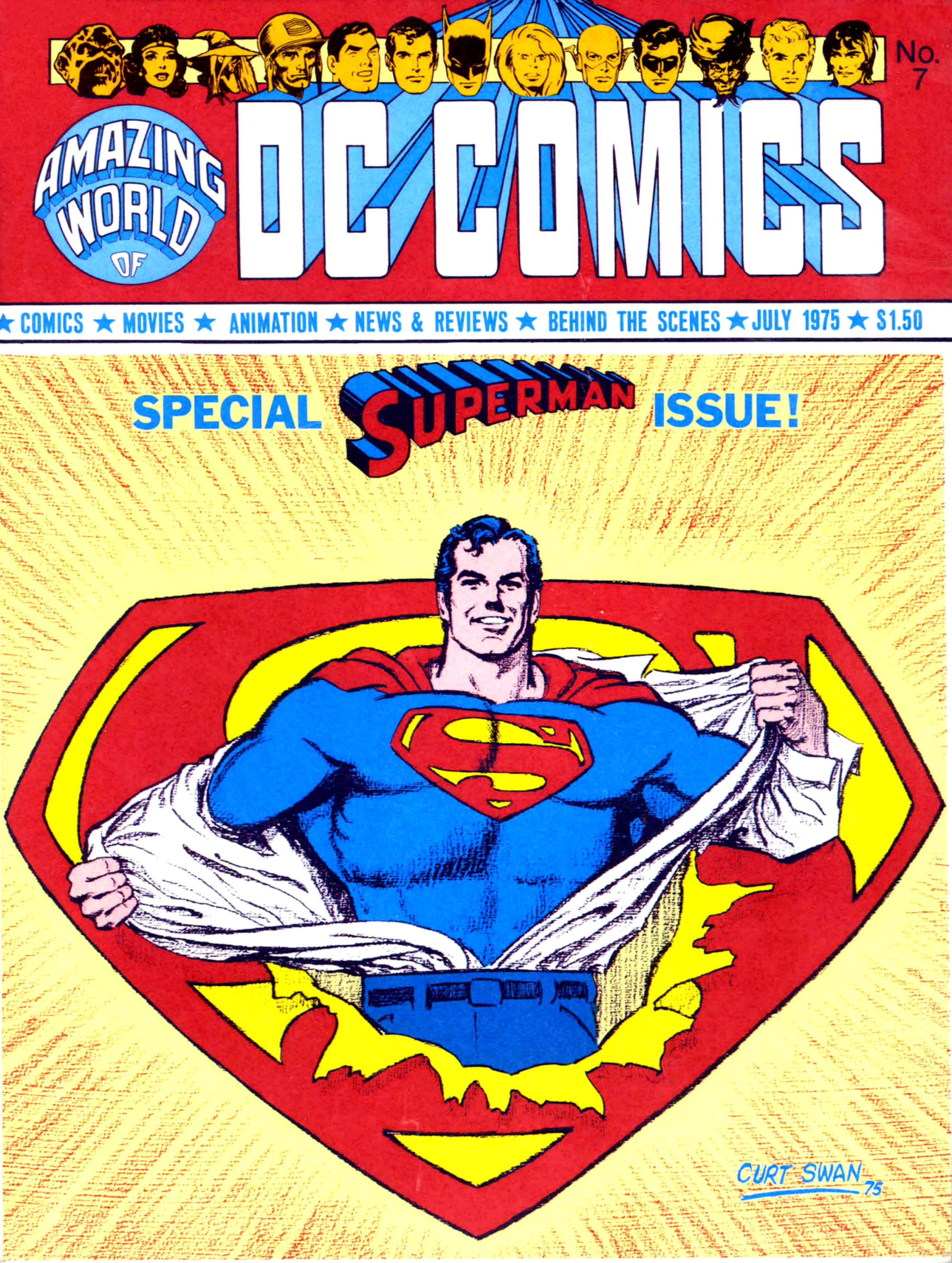 THE AMAZING WORLD OF DC COMICS INDEX (UPDATED GRAPHICS 10/2020)
One of my first websites, originally created by a group from AOL who appreciated this DC Fanzine. I've preserved our resulting index here on MetropolisPlus. 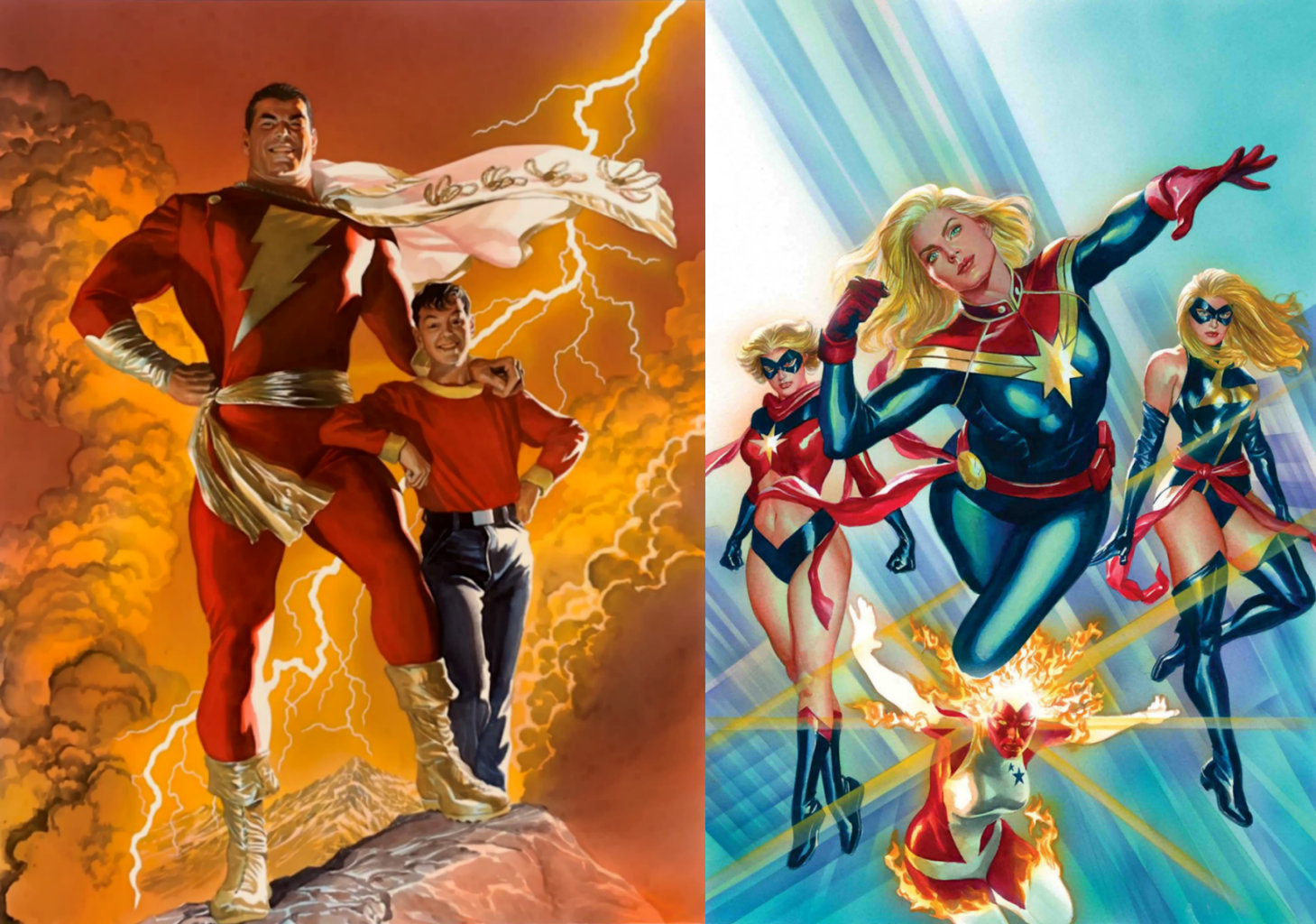 BRIAN G. PHILBIN'S MetropolisPlus.com "Hey!!! Kids' Comics" - text is ©© Brian G. Philbin. If you have any question, comments or other items of interest to this page, please feel free to E-Mail Brian G. Philbin at KlarKenT5477@gmail.com. All items which are highlighted in blue text and underlined are links to the named item. Some of these pages were originally hosted at Metropolis1 dot net from 2001-2006 and on my AOL webpage from 1999-2001..